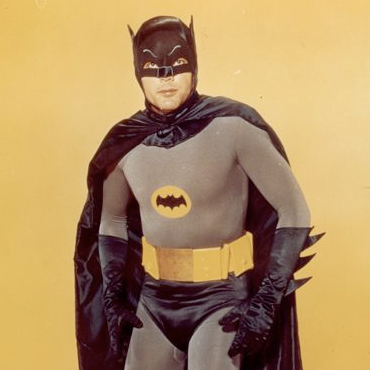 Adam West is Batman for any kid growing up in the 60’s and watching the reruns in the 70’s. For me, and many my age, he is as iconic to us as William Shatner, Stan Lee, George Reeves, Lee Majors and Clayton Moore. These were our heroes.

Adam West was part of the convention circuit and I am sad to say, I never had an opportunity to meet him. But I will never forget him. His voice commanded attention as he would raise and lower his voice nearly to a whisper and as a kid, we would hang on every word.

True, Batman ’66 was a parody of the comic book character, but the bright colors and perspective shots gave the tone of a comic book to the series. Even as a parody, it carried itself with respect and was full of action. Nearly every episode, Batman gave kids across America a nail biting cliffhanger – and I suspect no one could have pulled it off better than Adam West.

To this day when someone mentions Batman to me, the vision conjured in my mind is that of Adam West.

While sometimes good to great, the newer incarnations of Batman simply can’t hold a candle to the feeling of West’s to that inner child.

The Series Ends, But Adam West’s Batman Lives On

Even when the 1960’s TV series ended, Adam West carried on playing Batman. West played Batman in two recent animated movies, Batman: Return Of The Caped Crusaders and Batman Vs Two-Face. He also did a stint in 1984’s SuperFriends series and several other incarnations of Batman.

Check out his IMDB and you will be surprised at the sheer number of recognizable characters, movies and shows Adam West starred in. He had the timing of the greatest comedians and was an awesome role model for me as a 10 year old boy watching the show.

When my daughter came in to the room this morning and asked me, “Who is Adam West?”, I knew right away why she was asking.

Every time Facebook lights up with the passing of celebrity, she comes in and asks me who they are. This one hit me particularly hard. I watch YouTube videos and the like where he has been at cons and he seemed so full of life. He was a giant among us.

All I can say, is a little part of this child has died with him.

So do us a favor, Commissioner. Throw up that Bat Signal one more time for Adam West.