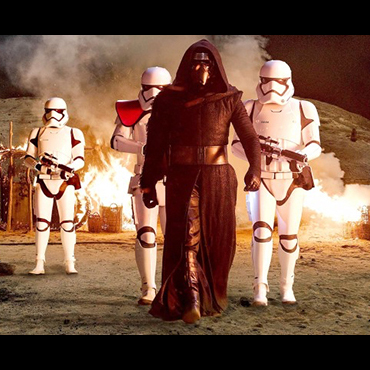 I recall seeing the first Star Wars movie ever made in 1977 when I was 9 years old. The only other memory I have when I was 9 was when my little brother (he was 4 at the time) choked on a hot dog. We had to call an ambulance to come and get him. He turned blue like Max Rebo in Jedi. Turns out he was ok. Of course, at 9 years old…I might have wished different for him. But he made it. I remember calling him Obi-Wan…even the Dark Side couldn’t keep him down. (I know this sounds harsh – but keep in mind, this kid took all my original Star Wars figures to school in a brown paper back that worked itself a hole…and all the figures fell out…never to be seen again.)

I held a lot of hope for The Force Awakens, in that it would bring back the old feeling I had when I was a kid watching the movie with my Mom and Dad and little brother for the first time. I remember first learning about this movie when my older brother came home after seeing it and describing the little guys in cloaks and glowing eyes driving the house on tank tracks. It all sounded so surreal and fun!

Of course, the movie was everything my older brother told me it was. It was fantastic. Simple, but fantastic! A Sci-Fi adventure with good versus evil and some awesome imagery and characters.

Fast forward, light speed, to 2009. JJ Abrams released his first Star Trek reboot movie. Being a hybrid fan loving both Star Wars AND Star Trek, I was concerned. A Star Trek movie centered around the original characters, my favorites, without the original cast. I was lacking “hope.” I was delightfully surprised by the quality and fun in that movie. I was encouraged when I heard he was making the sequel to Trek.

All Hope Was Lost

Star Trek Into Darkness is more than just a movie title to me. It has real meaning. The sequel to JJ’s reboot masterpiece destroyed all respect I had for Paramount and JJ Abrams. It truly was a trek into darkness, from which it would never return. I mean, have you seen that trailer for Star Trek Beyond (any help)? I lost all hope that, as JJ was announced as the director of the next Star Wars film, he would treat this fragile piece of my childhood with the great respect and reverence.

We arrived at the theatre on December 19th, one day after opening day. We got there an hour and a half before roll time. We were the first in the theatre. We had our Junior Mints, our Popcorn and our large bottles of water. It was time.

Spoilers Are Necessary – DON’T READ PAST THIS POINT! YOU HAVE BEEN WARNED…

Right from the opening, I was enthralled. I saw what made me feel like a kid again. Rey sitting down with an old Rebel fighter X-Wing helmet while she leaned back on a sand buried At-At in the middle of Jakku. It was heart warming. Daisy Ridley is a fantastic actress and her character fits the tone of Star Wars perfectly. Finn, Poe, BB-8 ad even Kylo Ren were all perfect additions to a universe of characters I have loved for so long. I was in a dream of a movie that I thought was lost since the 1997’s reworking of the original trilogy by Lucas.

My favorite moment of the film? When Han Solo entered the bridge expanse to follow Ren while on the StarKiller. He called out to Ren, “Ben!” Yes, he called him Ben! Kylo Ren’s real name – he was named after Obi-Wan “Ben” Kenobi.

The movie was filled with great moments. Chewbacca and Han working on a freighter, the mystery behind Rey, the fear in Kylo Ren – so complex and so much fun.

So Why Rejoice That JJ Is Not Directing The Next Film?

Oh, that’s an easy one to answer! JJ is not a sequel guy. I just don’t want to take the chance, after this masterful relaunch of the greatest sci-fi movie series of all time, that it will turn JJ to Jar Jar! I want to move on to the next director to carry the series and not worry that JJ will want to outdo himself. That’s the only reason. JJ did Star Wars justice and I want to savor this for a long time to come. Star Wars is right where it should be. What a return to greatness!

Tell us what you think in the comments. Did you like the movie? What was your favorite part? Captain Phasma? The escape of Finn? Kylo’s excruciatingly painful reunion with his father? Tell us all about it!