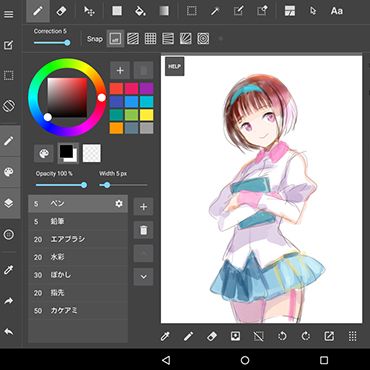 I am one of those hybrids…I am left and right brained. I have a constant yearning to be creative and logical at the same time. I can’t explain it. I am an amateur photographer, a published comic book artist, a creative director in the web industry, a businessman and coder – all rolled into one.

I love to grab up my camera and shoot a photo when I get an idea. I like grabbing my pencil and moleskine and draw a sketch. I buy books on my iPad about drawing Manga and photographic composition. 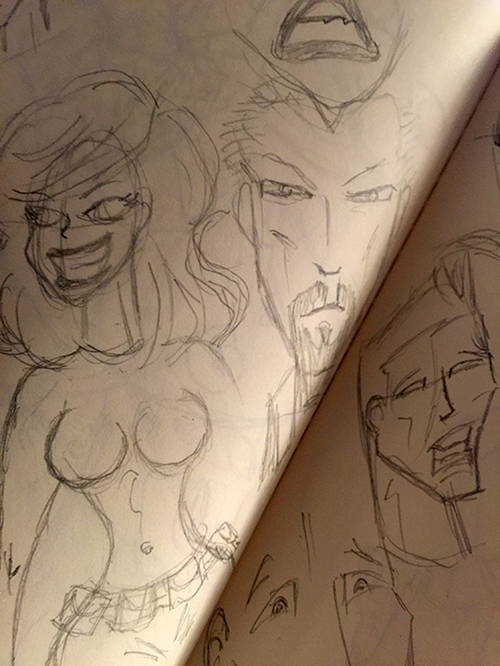 I love the digital world. I teach clients about leveraging the digital world in order to grow their businesses. I have always wanted to change my workflow to be less “messy.” I wanted to get rid of the pencil and moleskine to be more mobile and contained.

Three years ago I began drawing using Manga Studio EX5. It is a great piece of software, but it was clunky using a mouse on my PC laptop. I continued poking at it and trying to use it to satisfy my hobby, but never having really created a completed piece with it.

I was searching for a display digitizer that would allow me to draw directly to the screen and see my work, last year. Like most artists, I couldn’t afford a Cintiq tablet. The Cintiq is the Cadillac of the comic book industry. It costs $1999 on the low end. I began looking at other digitizers that were less money that other artists were using with which they were having good luck. I happened across an article by Frenden. Frenden is a freelance artist who has worked on some big name projects for the likes of Nickelodeon, Threadless and many more. His article prompted me to pick up the Yiynova 19″ tablet and I have had no regrets. 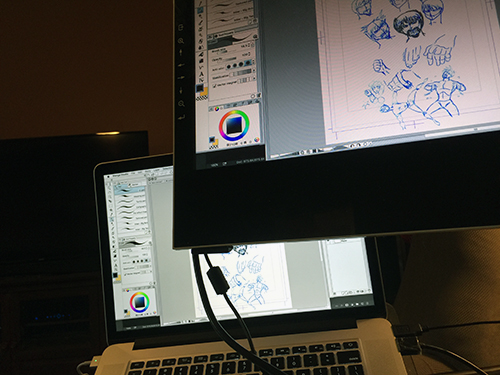 Also last year, I switched as a life-long PC user to a brand new MacBook Pro. I setup my Mac to use my Yiynova and installed the Mac version of Manga Studio EX5. Because I work a lot, I don’t get time in front of my Yiynova to exercise my art. I have always wanted to use my iPad to draw. I tried my Microsoft Surface Pro 2, but the screen was too small for the Manga Studio EX5 interface and it was a bit clunky. 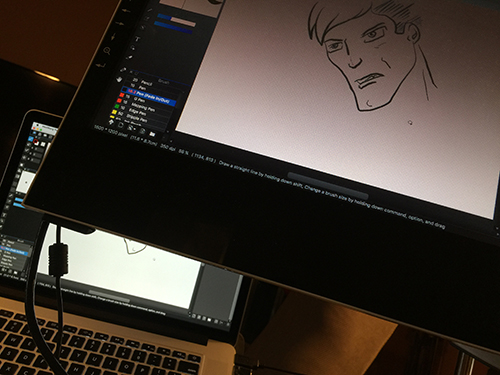 Being the Goldilocks of art apps and tablets, I just couldn’t find the perfect fit. I love Manga Studio with my Yiynova on my MacBook Pro, but it isn’t portable and Smith Micro doesn’t make an Android or iOS version yet. I continued my patient wait. I wanted an app that would allow me to draw on a tablet, save to the cloud and finish on my desktop.

It wasn’t until I decided I wanted to try an iPad Pro that I discovered there might actually be the holy grail for me. I bought the iPad Pro and found MediBang, a free comic book drawing app. Because there was a shortage of Apple Pencil’s when I bought my giant iPad, I had to use my finger. Of course, this was less than optimal. I quickly picked up the controls and learned the interface and used my finger to draw out a rough sketch. It was fantastic! I could imagine what I might be capable of if I had the Apple Pencil. 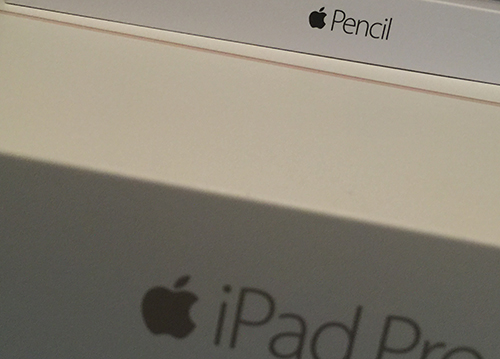 eBay Has All The Apple Pencils

Best Buy had no Apple Pencils. Apple’s online store and the three Apple stores within a 2 hour drive to my home also lacked any stock of the elusive pencil. I seemed destined not to see an Apple Pencil until 2016. My search finally took me to eBay after checking out Target and others with no success. I quickly found out why Apple and Best Buy had no Apple Pencils. It appears that even before the iPad Pro hit the stores, the Apple Pencils were there first. People bought up the $99 pencils and listed them on eBay. They were going for as much as $600!

I watched at least 20 auctions with Apple Pencils selling anywhere from $150 to $400. Finally, I decided I simply could not wait the 4 to 5 week estimate Apple had put on my order. I found a seller who listed a pencil for $180 as a Buy Now. I bought that pencil. I won’t go into the fiasco I went through with the shipping issues. The seller did nothing wrong, but the United States Postal Service was quite frustrating in the situation.

I installed the Apple Pencil and started using it right away. I was amazed by the feel of the plastic tip on the glass of the iPad. The bluetooth connection makes for a nearly perfect flow. If there is a lag, I do not notice it. The pencil is very responsive. The tip has the right amount of drag on the screen and it feels as close to drawing with traditional materials as I have come to with a digital alternative. The iPad Pro itself is a perfect size. I feel like I am getting enough space to draw on and see what I am working on in conjunction with the rest of the image, even zoomed in. Some screens are difficult because it seems like they are too small and difficult to see a large enough portion of the drawing up close. I am not sure if I am explaining this well, but it doesn’t feel claustrophobic to me at all. 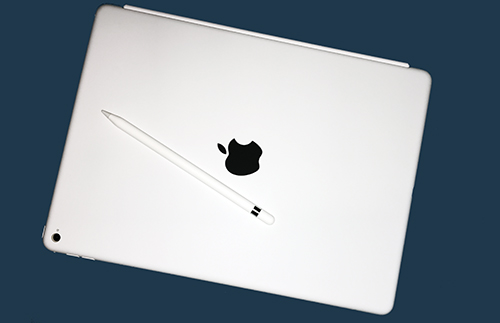 I would like to be able to adjust the lines after drawing them within MediBang for the perfect line, but that’s really the only issue I have found yet. The iPad Pro with the Apple Pencil is by far the best digital drawing tablet I have ever used. Now I just can’t wait until my vacation to get in some good use of it. 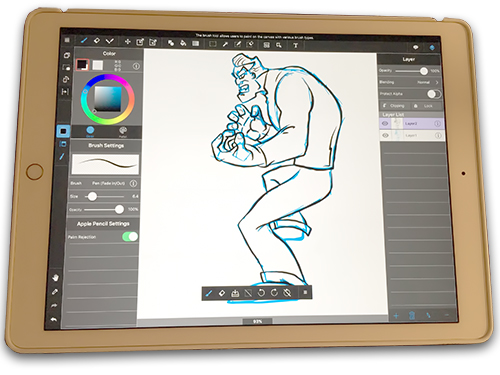 Do you have experience with a tablet and have a favorite of your own? Tell me about it in the comments. I would love to get some thoughts on alternatives.