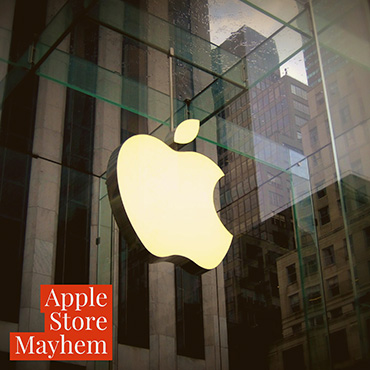 Apple Store Visits Are My Favorite

The ambiance of an Apple store is part of the overall experience. They are all decked out in their white plastic and aluminum packed with digital greatness.

Typically, entering one of their locations immediately fills me with the hope that either my problem or my need will be addressed with the least amount of stress compared to other buying experiences.

No such luck this time around.

Where did they find these “geniuses?!” 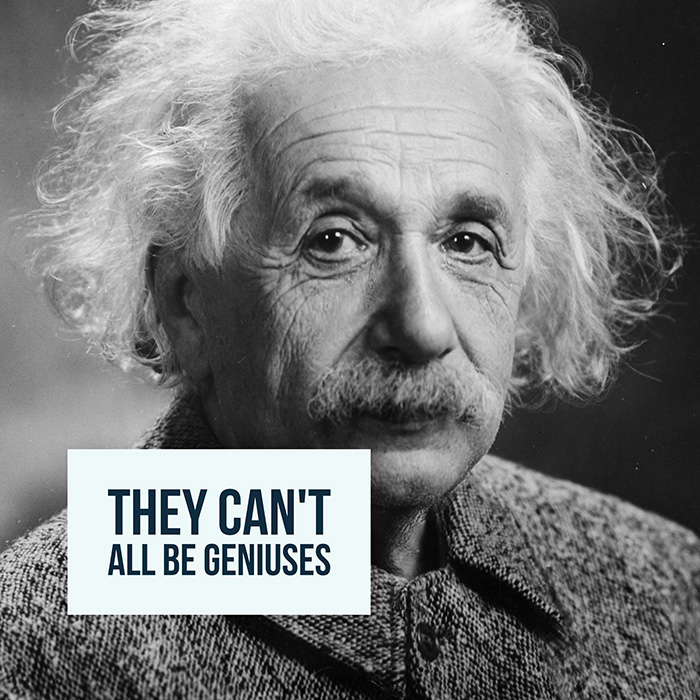 Our Apple Store visit took no less than 2 hours and 20 minutes. If we are looking around and browsing and then making a buying decision, I would expect a lengthy stay. However, never 2 1/2 hours.

My daughter’s iPhone 6 Plus ran into the failure of the home button. It would no longer respond to any press or finger read. It was toast.

She thought it had to do with a failed attempt to update the operating system on her phone. She tried setting up assistive touch in order to implement a workaround. It didn’t work. The phone’s home button was broken.

This girl is not a fan of “the cloud.” We attempted to dump her photos and data to her Mac. She was able to save most everything, except her text messages. She really wanted to keep those, so we downloaded Decipher (check out our review and experience with this software). After several attempts to get her messages, I decided we would pick it all up and take it to the Apple store. 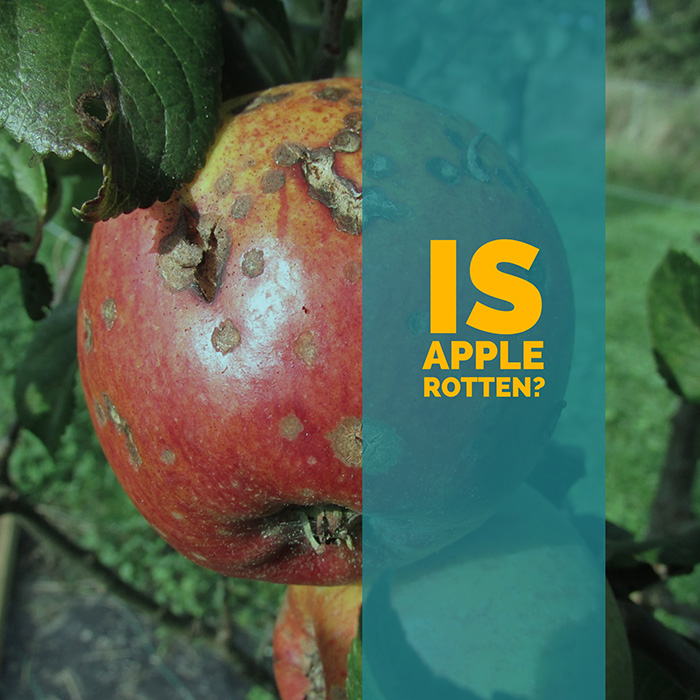 We entered the store and were greeted by the Apple Queue Keeper. She asked what we needed and we told her we were considering a new phone, while wanting to get her current phone looked at.

She was able to hand us off pretty quickly to what we call The Apple Table-Top Guru. This is the sales person they send to lean on the table with you and talk about your love of everything Apple. They listen and let you sell yourself.

The Table-Top Guru couldn’t provide support for the broken home button on my daughter’s current phone. He said we would need to see a tech. He also mentioned we would need to have the button fixed to transfer all the files if we were to buy a new iPhone 7 Plus.

He walked us to a line of people standing in front of a young man, we call The Apple Guru Gate-Keeper, who was helping people with their issues. He was tapping on his iPad as he was assisting people. It made me feel good as I thought he appeared to be quite confident and people were smiling. I was hopeful we would be the next happy customers in his queue.

Level One Of Apple Store Hell

It was finally our turn to speak to the Guru Gate-Keeper. I had wrongfully put my confidence in the Guru Gate-Keeper as someone that could actually help us. The tapping on the iPad was simply a ruse. He had a selection of icons noting issues shared with him from those pour lost Apple souls in the line. The iPad then provided guidance to him on actions to take. After looking at my daughter’s phone for 2 1/2 seconds he said, “You need an appointment for the Genius Bar.” 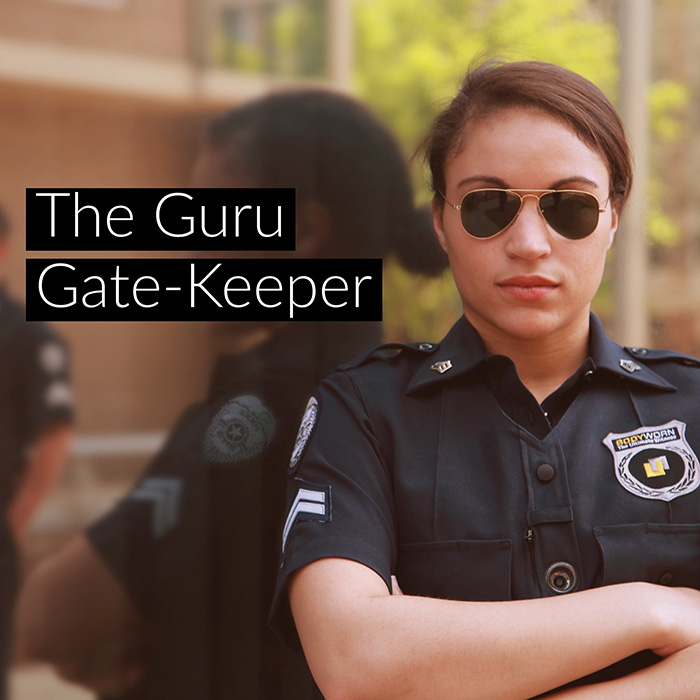 We were about to have a meeting with greatness! We were being scheduled to meet with an Apple Genius. It felt similar to when I was in line at a comic convention in the early 90’s to meet Todd McFarlane. It was exciting. Yet, I had already been let down twice with mediocre support during my visit to the store this time.

He estimated a 45 minute wait and took my phone number in order to text me to let me know when to return. We left the store and sat outside in the mall on a nice bench. My wife and daughter decided to take a walk to a nearby store.

Within 10 minutes of sitting on the bench and my family leaving to visit another store, I received a text that our turn in line at the Genius Bar was upon us!

I texted my wife to tell her they needed to come back. They arrived within minutes and my daughter and I entered the Apple Store, once again.

To my disbelief we were escorted back to the line with the Guru Gate-Keeper! By now the line was long and slow. I felt like I was waiting in line during the busiest season at Disney World for my turn on the Dumbo ride…without a FastPass. Ugh! 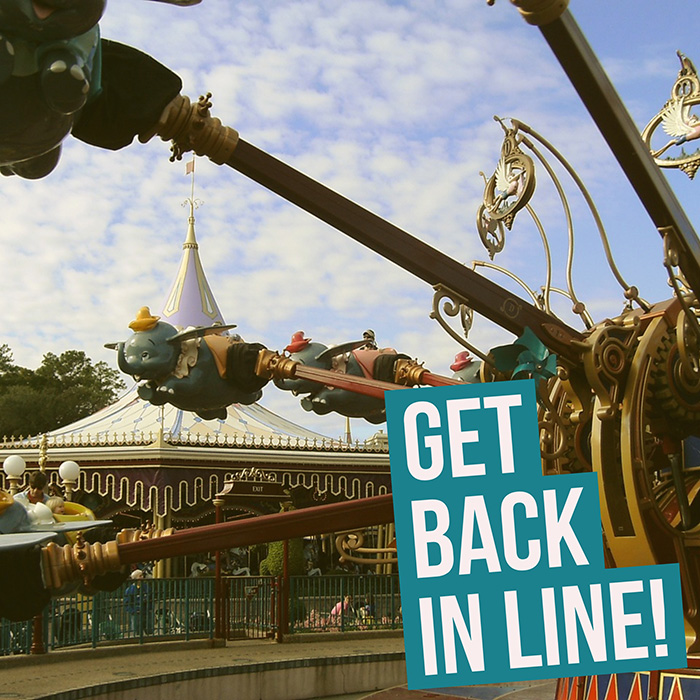 Out Of The Darkness, A Bright Light Of Hope!

A chipper young man (we call him Really Cool Line Guy) approached the line and shouted above the chatter from the line, “Is anyone waiting in line with an appointment for the Genius Bar?” I raised my hand and he quickly whisked us away. He sat us a table in front of the Genius Bar. I was giddy and felt like it was the front row at a Kiss concert waiting for Gene Simmons and crew to come out on stage. 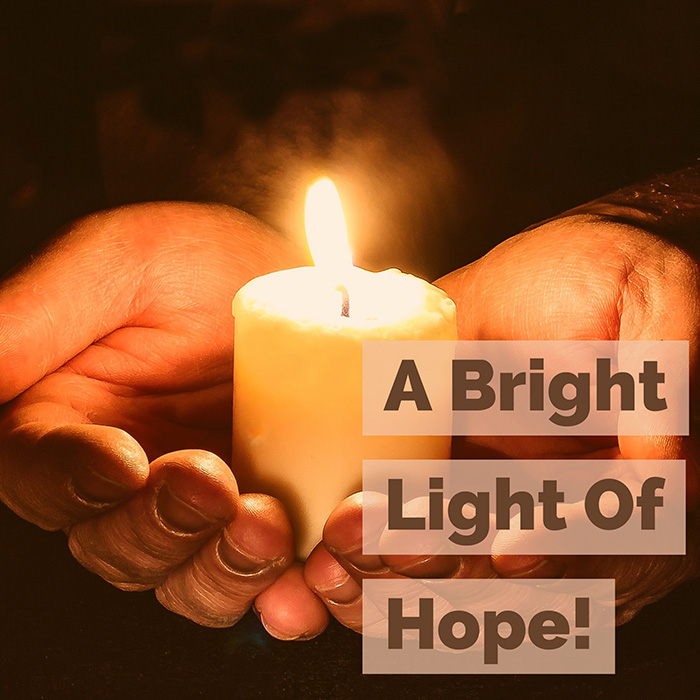 There Was An Aurora About Her…A Glow Of Greatness…

From behind me a voice called out my name, “Steve!” I looked around and did not see the source of the voice, but it was the voice of a nerdy angel of genius.

Finally, she came into view. The aurora of geeky intellect surrounded her presence. She asked us what the issue was and we explained that the home button on my daughter’s iPhone 6 Plus was not working. She played with the phone for a minute and said, “Yeah. You need a new button. Let me see what that will cost.” As she tapped on her iPad she said, “But you may be better off buying a new phone if that’s what you’re considering.”

She then found the price to fix the home button…”$149″, she said. I looked at my daughter and she was pretty adamant she wanted that new iPhone 7 Plus. So, I told her we would like to go ahead and talk about getting a new phone.

By now, we had interacted with 5 different Apple Store employees. Queue Keeper, Table-Top Guru, Guru Gate-Keeper, Really Cool Line Guy and A Genius. It was like a well orchestrated end around in Football. There was great blocking and hand-offs and running right through the defense. I was dominated by this group of Apple athletes! 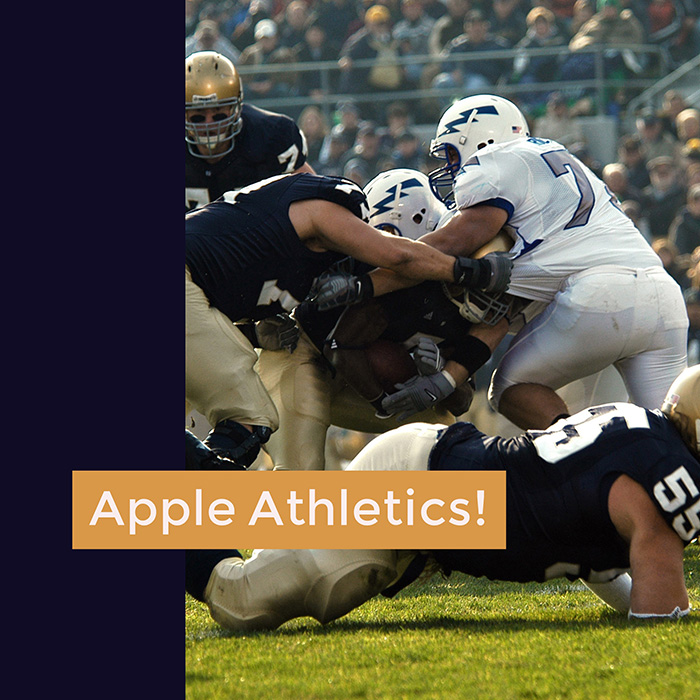 The Genius now hands us off to a new Table-Top Guru. She is the one that ultimately sells us the new iPhone 7 Plus. First, we tell her which phone my daughter wants. We also ask about the financing options. The Apple website clearly states we can buy the 256GB iPhone 7 Plus for 24 Months, Interest-Free for around $45/mo as part of their upgrade program.

I explained to the Table-Top Guru that I had previously purchased two phones with this financing program and she said, “We don’t offer that anymore. Is that where you had to have a credit card where the payments were charged?” I said, “Yes.” She said they no longer offer that and instead offered an 18 month, interest-free program. Reluctantly, we agreed.

I filled out the credit app for my daughter and then waited. We were approved and whisked away back to a Genius table surrounded by Geniuses. I am not sure what kind of insurance they need to hold having that many Geniuses clustered in an area like that.

How Many Geniuses Does It Take To Setup An iPhone?

No less than three Geniuses were involved in the setup of my daughter’s new phone. So, what do you get when three very smart people work on your phone at the same time? An hour and a half longer in the store.

First, they attempted to take a backup from the phone with the broken home button. It was a chore and as I watched them toil with it, I was could see how multiple Geniuses together equals negative one and a half brains.

As we sat at the table we asked our Table-Top Guru to tell us the payment and it was $20/mo more than my previous phone purchase.

I told my daughter not worry about because I would cover the difference. However, this is the key problem with our visit. Later, she showed me the Apple website which showed clearly displayed the 24 month interest-free financing at $45/mo. 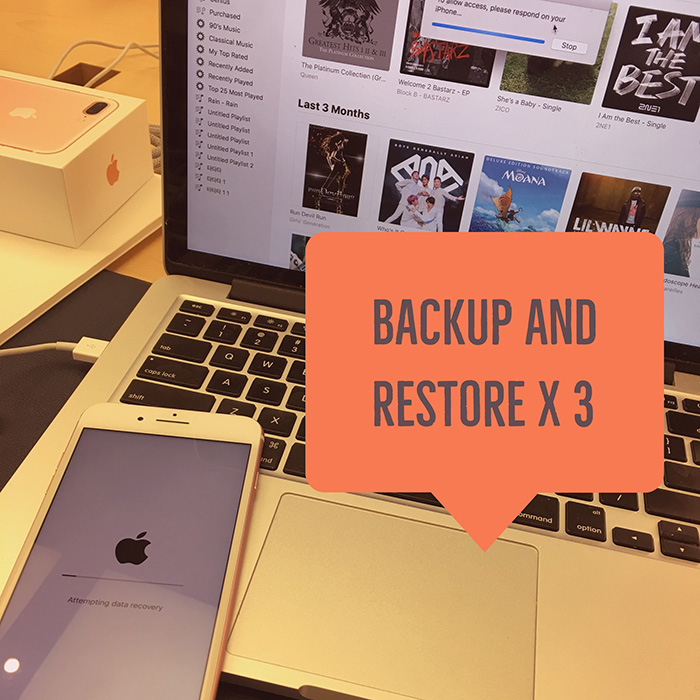 We continued through several rounds of phone backups and updates. One “Genius” disconnected the phone during an update because it appeared to her it was taking too long. She then discovered we just needed to be patient and wait for the process to finish in its own time. Upon the second round of updating it finally finished. At this point, she left for home and a new Genius took her place. He explained he was a Table-Top Guru and was just a placeholder as he was not a technician.

That’s when things really started picking up pace and started working better. Apparently, we just needed one less Genius to get things working.

I Couldn’t Let It Go

The financing for the new phone really burned me. I Tweeted, “.@apple bait & switch? Website $45/mo 24 month financing. Apple store told me that was not available. $65/mo for 18 mos! #epicfail”

Apple responded with a web address that had options only for technical issues. I tweeted back about my disappointment with their response. They tweeted yet another web page…and again, no options for financing issues. But, I called anyway and worked my way through conversation to a guy who was apparently one third of Apple’s three stooges.

This guy tells me I have to call my carrier. Yes, he was thinking I had purchased a phone through a financing plan with a carrier. I explained to him the phone was purchased unlocked. I told him financing was through the bank offering via Apple.

The stooge put me on hold, apparently to ask another third of the stooge clan about my issue. I waited on hold for several minutes when he finally came back and told me he had the right number at Apple for me to call about financing. I was absolutely surprised and almost regained my faith in Apple. 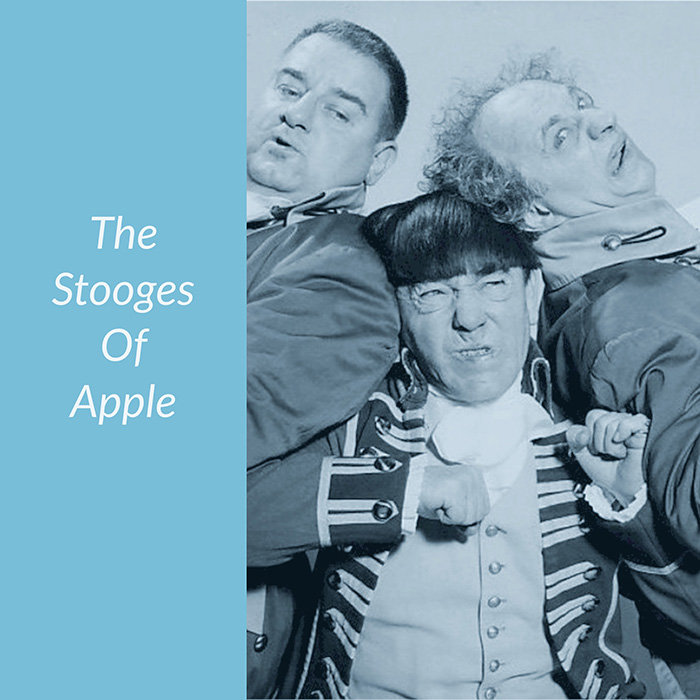 Again, Too Quick To Praise The Idiots

I called the phone number…and it was to the bank that provided the financing on behalf of Apple. My problem stemmed from the website publishing an offer that the store told me wasn’t available. The bank isn’t going to be able to do a thing about it.

I continued my Tweet rant, but I see no other option than to write this blog to help me blow off steam. I can see now that Apple’s once impenetrable customer experience armor has a large hole in it big enough to lose my business. I only hope they fix it before it’s too late. These business practices seem to be intentional and that seriously impacts my trust in them.

Do you have any Apple Store horror stories? Have you been let down? Has Apple been rotten to the core to you?

Tell us about it in the comments.