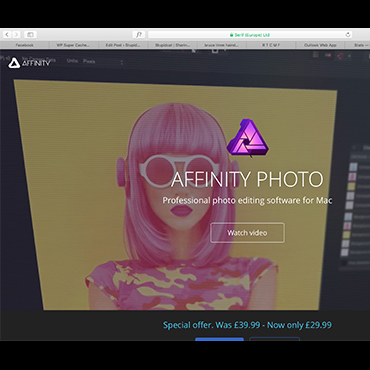 Affinity: A Thorn In The Side Of Adobe
Steve Crandall
Photography

Affinity made a splash mid 2015 with the release of their photo editing software for MAC called, Photo. They quickly gained ground through great reviews and a grassroots launch that included a free beta release. Many features in Affinity Photo set it up to become a thorn in the side of Adobe’s flagship image editing software, including the low price of around $50 in the MAC App Store. But is it enough?

I use a lot of third party plugins and actions with Photoshop. My favorites are Topaz Labs, Imagenomic Portraiture and Phlearn‘s action bundles. Some plugins will work with Affinity, but I had trouble getting my Portraiture plugin to function. My actions, of course, will not work.

Being a hobbyist portrait shooter (as well as still life and objects) I use Frequency Separation a lot lately. Affinity has this capability built in. Photoshop does as well, but I use Phlearn’s action (be sure to check out their tutorial) to really simplify the process. Affinity continues to update the software with a recent release in December 2015.

The interface is crisp and professional, albeit a little “Fisher Price”, and the workflow does require you to change things up a bit. Long-time Photoshop users and pros will likely find the interface to be too much of a change to consider a transition. Those people likely won’t find anything too compelling that would convince them to transition. MAC users on a budget (an oxymoron, really, considering the price of a MAC) may like the one-time $50 price, rather than a subscription for Adobe.

Adobe’s Photoshop is used by photographers and designers alike. Affinity is clunky for a first time user trying to create a small 30 by 30 pixel image of a social icon for a website. I eventually figured it out and could move quickly, but intuitively it was difficult to get the job done at first. Adobe has been changing things up with their subscription pricing since they went to it and have priced Photoshop/Lightroom bundle at $10/month. While Photoshop has really become a bloated behemoth over the years, Adobe recognizes this and has already worked to shore up performance with a new release for subscribers. The price simply cannot be beat.

So, does Affinity give Adobe’s product a run for it’s money? Not really. It is a thorn in it’s side, but Adobe is taking this seriously. They don’t want their flagship product to be the next irrelevant app like Flash. They are making changes consistently.

If you are a photographer that is on a MAC, it doesn’t hurt to have Affinity Photo in your toolbox. It’s fun to play with and watch/monitor as it grows. But at just $10/month, Adobe Photoshop/Lightroom’s bundle is hard to beat. Our recommendation is to stick with the original. You won’t regret it.